I was on the road last week doing businessman type things with other business people in an attempt to win new business for my company.

The secret to having a good business meeting is to end it with a good meal.

People buy from people and the best way to get to know a person is to share a meal with them…and maybe a drink, or three. You’ll build trust and a rapport and at the very least you’ll come away with a few good stories.

It’s also nice if the people you’re eating with take you to a local restaurant with good food and a great history.

Thankfully, the people I was meeting in Reno knew just where to take me.

Reno, as it turns out, has a major basque population. As it was told to me, which you could verify via Google if you were so inclined, Nevada (Reno specifically) has a climate similar to the basque region of Spain. This brought a large influx of sheep herders to the area and thus the population did boom.

With those Basque immigrants came Basque culture and most importantly (to me) Basque food.

We ended up at Louis Basque Corner which opened in 1967 in the original Lincoln Hotel from 1907…yes, it is very cool and old and yes…also cool.

The original hotel was one of many that catered to the Basque migrants who could stay at a hotel for a little “home away from home”. They hotel was built on top of a bar or restaurant and the people would come down and eat traditional Basque food at communal tables.

In the dining room, not much other than the century has changed.

In fact, today, if you come in you’re sat in the first available seat at a table with a bunch of strangers eating food and drinking wine and Picon Punch...and, hopefully, talking with each other.

You sit down and you’re given a list of meats, that’s all. They serve traditional things like sweetbreads and tripe as well as steak and lamb chops…but that’s the extent of your meal choice.

The rest of it just comes. Including the red wine, which is placed in large carafes on the table and should be consumed joyously throughout the meal.

First, the soup came. This time it was beef barely. A few big plastic bowls make their way around the table and you eat as much of the hearty soup as you want.

Why do plastic bowls matter? Because they do. They are amazing and make me feel like I’m at home eating with my family…which is how all food should make us feel if we’re doing it right.

Oh, and also…they’ll just bring you more soup if you ask for it. Like…what?

After the soup they bring out the lengua and salad. The tongue was cooked with mushrooms, peppers, and onions in stewed tomatoes. While it was the first tongue I’d eaten that still looked like it could lick me back…it was delicious. Tender and flavorful without being overpowering.

The salad was…salad. Good? Sure. But look at that tongue…maybe if it was a tongue salad that wasn’t actually a salad but just another plate of that tongue it would have been more memorable. But it wasn’t…it was just a regular old non-tongue salad. 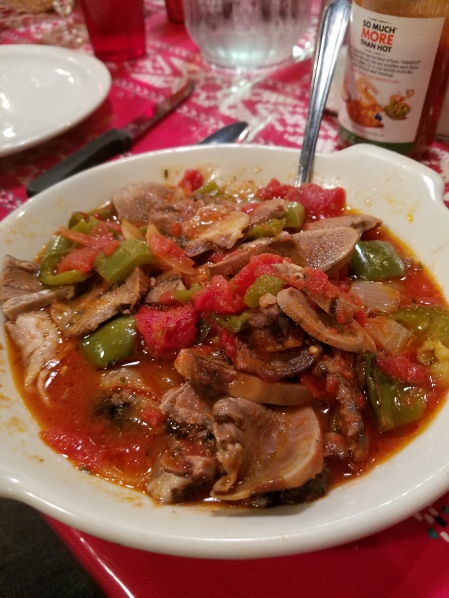 Even though the picture is a little disappointing, the steak was not. It was perfectly cooked and seasoned. I believe other people had meat as well but I can’t be sure. I was so taken by this meat I didn’t really pay attention to anyone else.

Needless to say, the meal was a memorable one for me. I love getting to experience a new food culture and enjoying it with good people.

I left the meal with good stories, good friends, and another example of the importance of the dinner table.