You know that old relationship you had in high school. The one that, at the time, you thought was perfect and could never end.

The two of you were inseparable. You’d write notes and leave them in each other’s locker, you’d let them wear your favorite Starter jacket all week and you’d always…always figure out a way to cheat “spin the bottle” to get a kiss in public without succumbing to PDA.

Well, this story is kinda like that…but with Guitar Hero and Pork and…ok it’s nothing like that, I just didn’t have a good intro this week.

If you’re not totally annoyed by that and want to cook a pretty solid pork dinner, please read on.

Ok, well, last Friday I made a Gorgonzola Green Apple Porchetta with for some friends and we played Guitar Hero till nearly 2am…which is a feat when you consider that the majority of us are 30 years old.

I love making porchetta, it’s a fairly easy thing to make and you can get as creative as you want with it.

It is as delicious as it sounds.

Unfortunately, since Stax wouldn’t be too fond of me dragging a boneless pig body into the house, I settled on a pork loin. 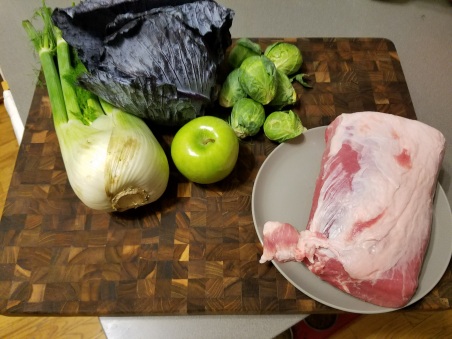 I like to rinse and dry my pork and let sit to come to room temperature, before cutting it down. As long as it’s not frozen you don’t have to wait, but it’s a preference because cold meat hurts my hands…ho boy. 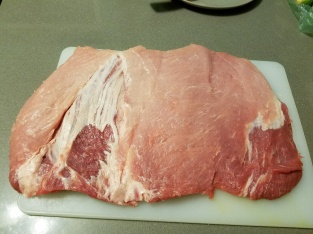 Now the fun part. Take your sharpest knife and cut the meat down till it’s a single flat piece. I usually start about an inch from the top, but you’re going to pound the meat flat so it’s not terribly important. 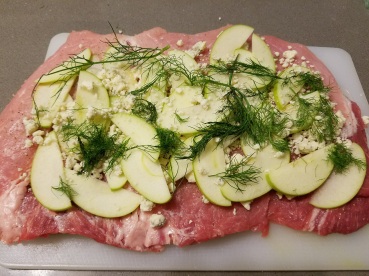 Once you’re satisfied with the status of your meat or when you feel that it’s “rollable” you can cover it with your toppings.

Salt and pepper the inside of the pork, though not too much since the gorgonzola is pretty salty.

I used green apples so the bitter woudl offset the gorgonzola.

Put a layer of cheese, then apples, then cheese and top with the fennel fronds.

The thinner your apples, the easier it is to roll. And speaking of rolling, we’re at the next step.

Meat bondage is an art and should only be practiced in the safest of ways. If you’re afraid to do it alone, find a friend who will help.

I use a modified butcher’s knot. It’s a basic butcher’s knot, but for lazy people. You cut a long piece of twine, tie it around one end width wise, loop the twine around the length of the meat and from there you just make loops using the middle piece as a guide.

I’ll make a video next time.

Salt and pepper and get ready to putting heat to meat.

Pre-heat your oven to 375 and get your pan very hot.

You’ll want to sear your pork on all sides to help keep in the juices and get a nice color.

I will normally cover the pork with some tinfoil for the first 30-45 minutes and then take it off for the last 15 minutes of cooking for some additional color.

You’re looking for 145 degrees with your pork, and since it’s sliced and rolled it’ll cook faster than you think…don’t dry out this beautiful piece of meat.

When all is said and done, it’ll come out looking like this:

Just slice and eat! I made a quick pan gravy with some hard apple cider and the drippings from the porchetta, a blue cheese fennal slaw and some garlic green beans 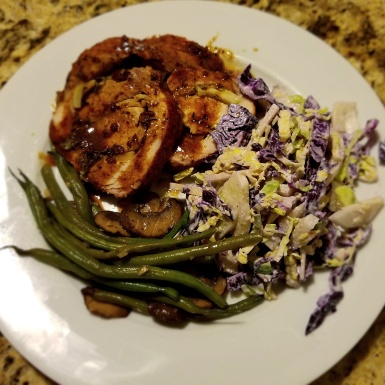 Did I mention that everyone was playing Guitar Hero while I was making this? Well, they were. I ended up playing too and we had one of the most adulty-kid eveings of our lives.

1/2 cup gorgonzola cheese (use more if you want!)