Ok, well it was actually two nights and we actually did more during the day than at night…but the SONG YOU GUYS…I mean come’on.

I’m not embarrassed to admit that Stacey and I probably sang the refrain of this song way too many times while there.

Ok, well, with the image of Stacey and I eating street meat while singing in unison firmly placed in your mind, I’ll begin.

I know, I waited a long time to get this post out, but in my defense…I was really tired.

After about 20 hours of travel, we arrived in the City of Angels (just found that out on Wikipedia btw) and went immediately to sleep…when we finally got to our hotel

We arrived in Bangkok near the 1 year anniversary of the passing of their King Rama IX. The Grand Palace was closed to the public, save for mourners, and much of the area around the palace was closed off to traffic for the upcoming ceremony. So we were dropped off a few blocks away from our front door…at 12am.

Our hotel was the Sala Rattanakosin in Bangkok which was just a block away from Wat Pho and across the river from Wat Arun, prime real estate, though we couldn’t see it at the time.

The next morning, at breakfast, our view was a bit better.

Stacey also thought it was a good view. 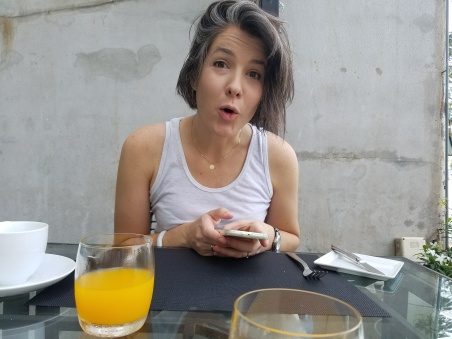 After a breakfast of a blue crab omelet, a traditional rice porridge with sausage, and a plate of fried morning glory with thai chilis (which was the best of the whole trip…we checked) we were off to take in the sights.

Bangkok, if you don’t know, is a large city…there is so much to do and see and with only one and a half days we knew we weren’t going to see it all…it was time for a quick and sweaty tour of the highlights…and Bangkok did not disappoint.

With the help of a very nice man who was cleaning up after the previous day’s event, we were able to hire a tuk-tuk for the day… 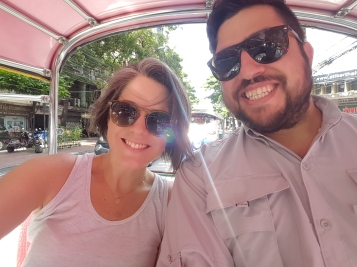 …and made the rounds. 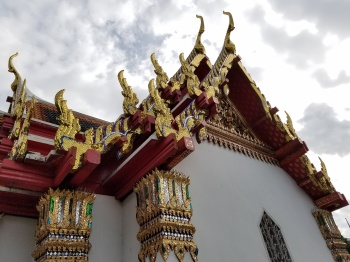 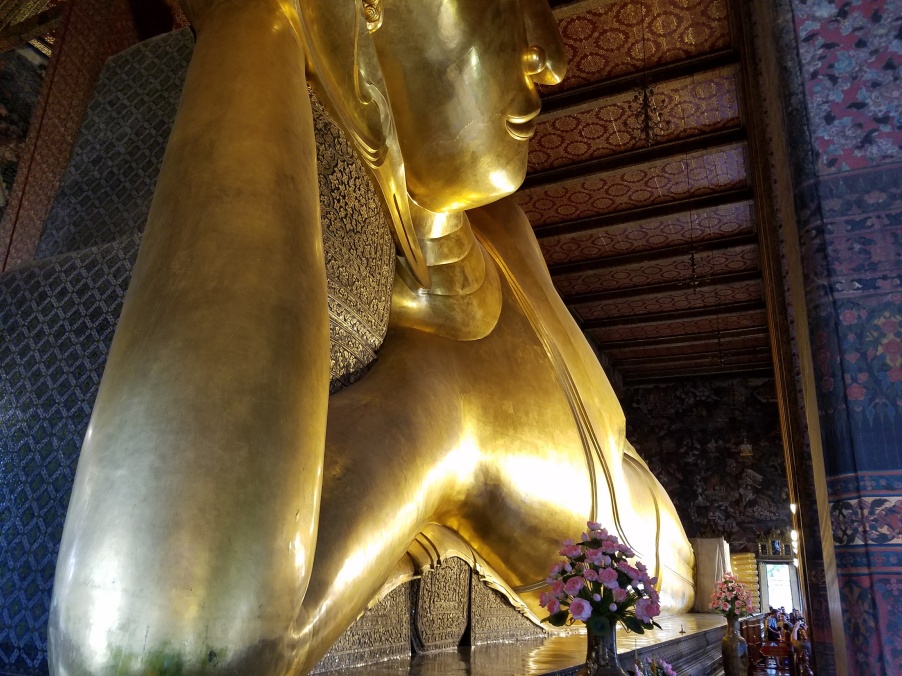 We saw several temples throughout the day, some big and some small but all beautiful. There were so many variations of the Buddha – standing, sitting, laying down, under the Bodhi tree, even differences in depictions based on what country the Buddha was from.

Wat Pho, which is the largest Wat on our side of the river, had this enormous reclining Buddha. It was, as you can imagine, incredibly impressive.

Really, the entire experience was impressive. The temples were so beautiful, and being able to witness the reverence the Thai people have for their religion was one of the things I will not forget about my time there.

We got back to the area near our hotel and had a quick bite before heading in for a shower and sunset drink.

After sunset, we set out again in search of a flower market near the Chinese section of Bangkok. Again… not disappointed. 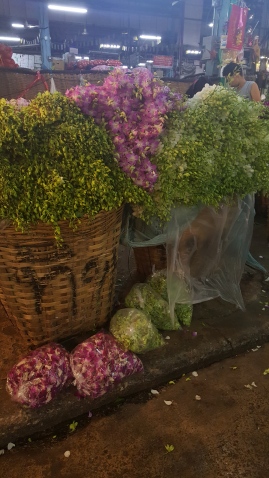 There were rows upon rows of every flower you could imagine. Baskets of loose flowers and ornate arrangments and so many colors. I wish we’d taken more pictures, but as the only tourists there, I felt a bit odd taking a picture of something that was such a part of their daily lives.

We headed back to our hotel sweaty (again), exhausted and ready for bed…but not before some street meat.

Despite my desire to be very much like mister Anthony Bourdain, I did not indulge in the grilled chicken butts.

The next morning started much like the first. Blue Crab omelet, rice porridge, and that sweet sweet morning glory.

We only had half a day before heading to the airport and to Phuket for our next leg, so we got to getting. First stop, an amulet market that Stax had seen on her map.

It was a very short walk to the market so we ended up there before many of the stalls were open. What started as a narrow alley off the street opened up to a massive maze with stall after stall of different amulets and figurines.

Stacey also managed to have a Disney moment with a random kitten that was laying on one of the tables.

After the market, we hurried back to our hotel and hopped on a ferry to the other side of the river to visit Wat Arun. This was a huge complex of temples and gardens with beautiful flowers and statues. 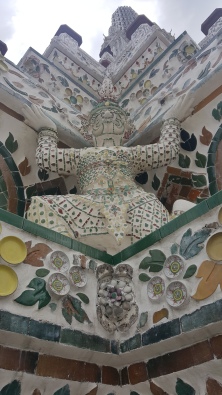 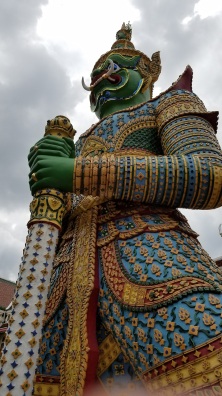 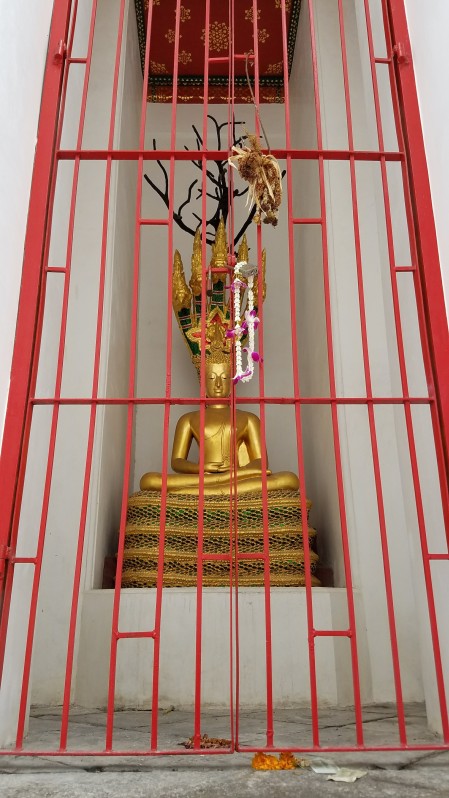 The entire temple complex was being prepared for the upcoming ceremony for their King and was busy with monks and groundskeepers. We spent the perfect amount of time there and walked back to the ferry dock for a quick meal and a cab ride to the airport…Or that was the plan.

The ferry dock had a sign that said “Closed for 5 hours” and we quickly found out that they didn’t just mean this ferry, they meant the entire river.

I, with my cool-headed and problem-solving nature, immediately started to panic. Stax, who is actually the cool-headed one, walked down the river and saw a small boat pulling up. She ran out on the dock and got them to take us (and a bunch of others who were stranded) across the river.

After our mini-adventure getting across the river, we stopped for a quick bite of Phad Thai from a lady on the street. Her counterpart inside a little garage space quickly noticed the sweat literally gushing from my forehead and let us sit inside. 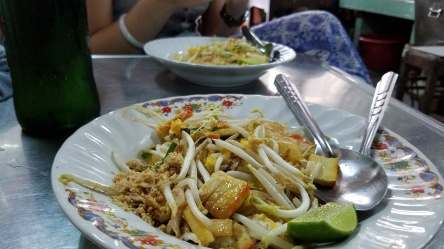 A cold beer and a Coca-Cola and two delicious plates of food later and Stax and I were on our way to Bangkok Airport for our next destination.

It was a Too Fast Too Furious kind of trip, but I’m so glad we got to spend the time that we did.