I really wanted to call this post Cooking to Forget but I could hear Stacey’s voice in the back of my head as I wrote it.

So, I decided to go with the (slightly) less dramatic title, even though it is still every bit as much of a “VagueBook” post as the initial one.

Truth is, things at CampGarcia have been a little tough of late and outside of the obvious, friends, family, not living in Russia, two things really help to lift the weight of the world.

If you listen hard enough, you can actually hear Stacey’s eyes roll at that sentence…

This meal was born both from a need to get more fish into our diets as well as get this stupid soy based sauce right.

And I think…I THINK…I’ve finally done that. I mean, I know we’ve eaten more fish, because we’ve eaten it…but I think the sauce is finally there. 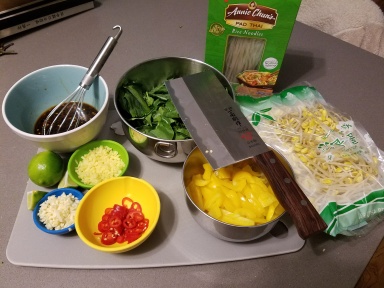 So, in honor of one of the greatest presidents that ever lived, my cutting board looked like this just before getting started.

You can use whatever veg you like, I chose peppers and Chinese Broccoli. 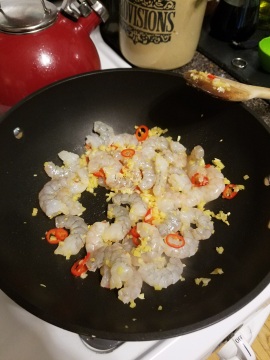 In a hawt wok, add some vegetable oil and your ginger, garlic, and Thai chili.

Let that simmer a bit, let those flavors mix and dance like a pre-puberty sock-hop.

Right before things start to brown, toss your shrimp in as well as half of your sauce and a tablespoon of corn starch.

Cook for a few more minutes or just as your shrimp start to firm up and remove from the pan. 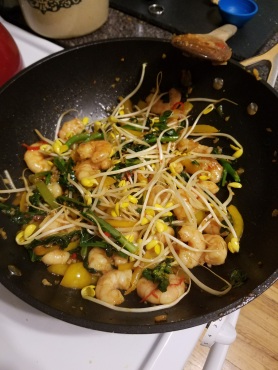 Now that your wok is free, toss your veggies in. Start with whichever veg needs the most time to cook, remember they’ll cook longer than you think.

Cook the veg just to the point before they are done. Then, add your shrimps back into the pan and cook till done. I added bean sprouts just before taking them off the heat.

Now it’s time to get noodle-y 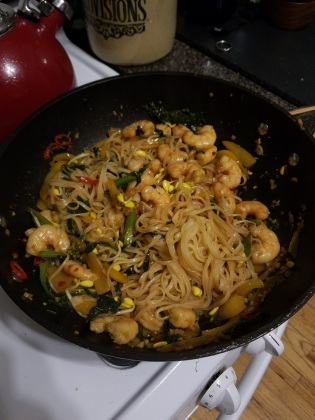 Once you’re satisfied with the state of your shrimp and veg, add the noodles into the pan and mix. At this point, I add the other half of the sauce so the noodles soak up the rest of it.

Keep stirring over low heat till the liquids are gone.

Yes, it really is that simple of a meal…you can add a lime and some green onions for a dash of pizazz and you’re good to eat. 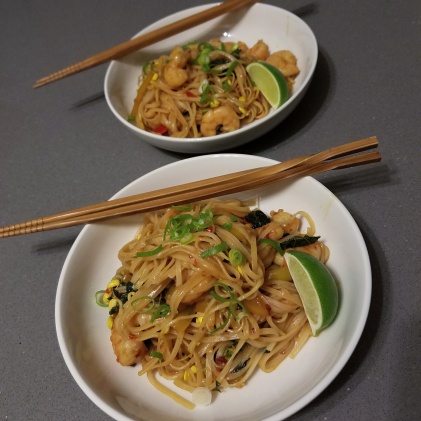 Listen, cooking and food aren’t going to immediately save the world, I know that.

But over the past few days, they’ve both done a damn fine job of helping to save mine.

So cook, smile, and kiss someone you love every day…it’s the least we can do.