Well, here we are again.

Just you and me. No one else is reading this but you. So consider yourself incredibly special, not only to me…but also to Earth Mother Gaia.

Which, you know…is pretty neat.

I was traveling this week so I had to do some meal prep for the wife, in order to keep her fed during my absence.

This was mostly in the form of Frozen Chicken Tenders and Fries, but I also made a huge batch of Mongolian Beef and cauliflower rice. Which…I am assuming she ate…and enjoyed…RIGHT STACEY!?!

Like any sane person, while cooking the week’s dinner, I also made dinner for us to eat while watching the Packers game. This week’s meal was a Greek Shepards Pie…thingy.

This dish was really simple to make and even simpler to eat. I used a spoon.

First, skin and dice up your eggplants. Really, the size of your cubes doesn’t matter as you’ll end up processing them all, but the larger they are, the longer they’ll need to roast.

Pre-heat your oven to 425 degrees and place your eggplant on the tray. Drizzle (which is maybe too sexy of a word for how I did it) oil over top and salt and pepper before throwing (placing gently) into the oven.

I roasted mine for about 30 minutes, but you’ll want to do it until it’s soft and fork tender, much like a Roman politician.

While you’re pureeing the eggplant, add your greek yogurt, olive oil and feta cheese and salt and pepper to taste. When you’re done, your eggplant should be pretty smooth with some chunks of feta throughout. 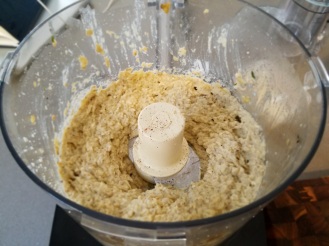 Spoon this tasty mess out and leave in a bowl to cool while you prep your meat.

Chop your garlic and onions and sautee in a pan with some red pepper flakes.

Once you’ve cooked the onions down to being mostly translucent remove from the pan and place in your meat.

I used Turkey for this because I was trying to be somewhat healthy, but you can use beef or pork or even lamb for this.

Cook your turkey in your onion pan and toss your Oregano, Parsley, Cinnamon and salt and pepper and, in the immortal words of Bob Marley…stir it up.

Once the turkey is mostly cooked, put your onions and garlic back in and Bob Marley that healthy mess. Toss in your pigeon peas (or any peas really) and cook for a few more minutes before placing in the baking pan.

Put your meat in the pan and then cover with your eggplant puree. Your oven should still be at 425 degrees and ready to receive your dish…

Bake for about 30 minutes or until the top is a nice golden brown. Right before you take it out, toss on some additional feta cheese and put back into the oven until melted…or until you cant wait any longer to eat it. Which is what happened to me.

Once it’s ready to eat, it’ll look like this: 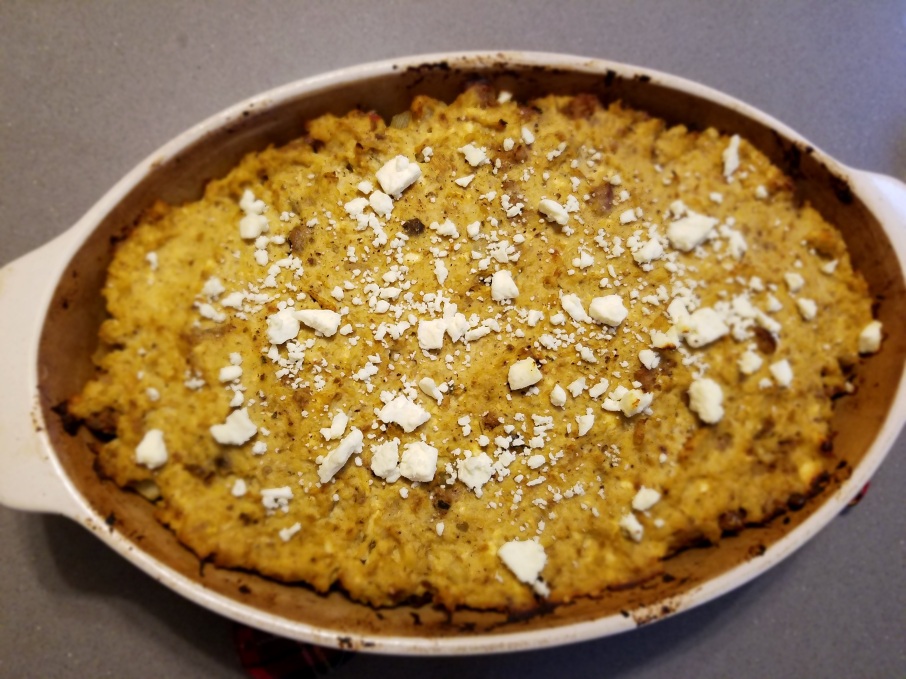 I…could not wait for it to melt.

It was, as they say in Greece.. Le Delicious.

Great meal that was relatively light and healthy and even my Greek wife said that it was “really good for something that’s not actually Greek”.

Feel free to reach out if you have any questions or would like to know more about my cooking techniques or meal planning!