This trip was packed with lots of rocking things. As you saw from the last post I could have written about Paros for another thousand words, and the second half in Athens was just as incredible with even more details…but for the sake of brevity I’ll hit on the key talking points:

We took the ferry back to Piraeus on Wednesday morning and got back to Athens in mid-afternoon. Given the new level of sweatiness (my computer just tried to correct that to meatiness, which is oddly accurate) I’d achieved we decided to head to our hotel and drop everything off before heading off for some eye stuff.

We stayed at Hotel Melia in Exarchia (Anarchy Town), it’s a short 10 minute walk from the main sights and the hotel itself was pretty amazing, rooftop deck with views of the Acropolis and a shower that has jets on the side, which I did not realize were pointed at my meaty bits when I turned them on.

Our view of the Acropolis from the hotel rooftop, not pictured is the shower or the meaty bits…you’re welcome.

Here’s the thing about Athens, it’s dense. Like, mega dense. So seeing the Acropolis rising off in the distance and knowing that this entire city’s history has centered on that sacred rock makes it all the more breathtaking when you first see it.

I wish I could tell you about each and every meal we ate in Athens…but I can’t. It’s simply too much meat. The fact that I survived the week is a miracle when considering the amount I consumed. We primarily consumed Souvlaki, which is…something.

Seriously, I honestly don’t know what the difference between Souvlaki, Kebab, Gyro or Donner is anymore. I thought I did. I really thought myself a connoisseur of “meat on a stick”…but I was wrong. Greece showed me a world of meat I never thought existed. You could get Donner Kebab, Gyro Donner, Kebab Souvlaki and honestly, all of it was delicious. There is even a place called Souvlaki Row which has several souvlaki places lined up as the Greek men sing siren songs of meaty goodness to bring you to their table. We ate at a place called Thanasis twice, I highly recommend their special kebabs.

All you need to know about my meat experience in Greece is shown below. 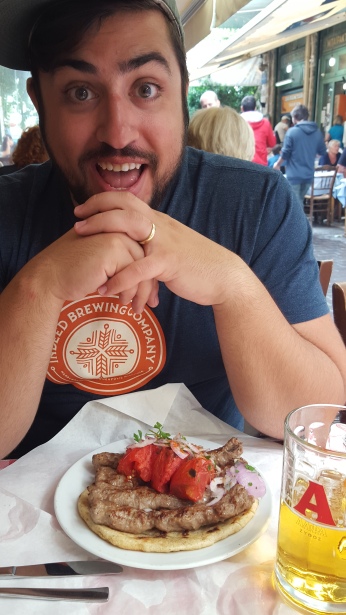 So much happiness on that face and so much meat on that plate. (That will be on my tombstone)

I do need to point out a special meal we had one day when it was particularly rainy and we had to run soaking wet through the streets of the Plaka near the Acropolis. We ended up at an ouzeri where they make their own ouzo (a greek alcohol) and serve small plates of food.  They come out with a tray of traditional dishes and you just pick what you’d like, get a bottle of wine or some ouzo and enjoy. We opted for wine and the food you see below…yes, all of it. 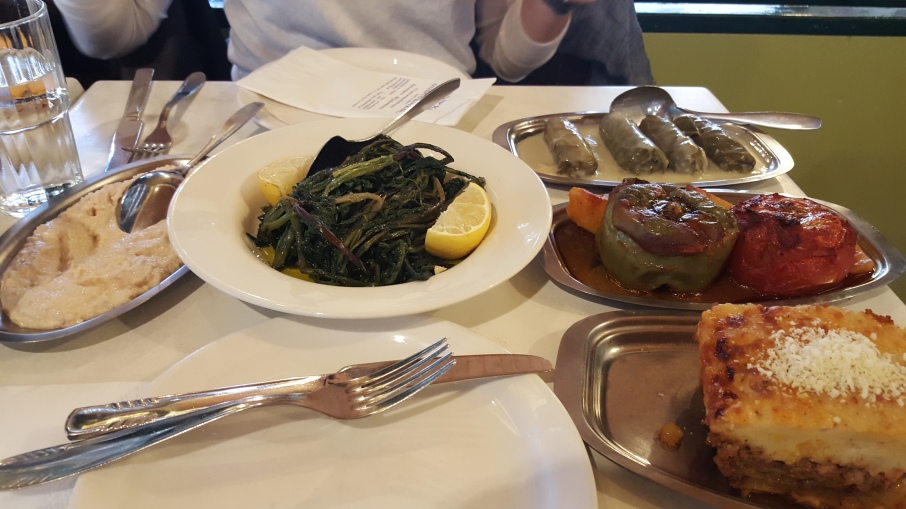 We also tasted the ouzo, because…when in Rome. Stax was not a fan, but drank it as to not insult her ancestors.

I say this with the utmost respect in the world for the history of Greece and  of old stuff all around the world. I love old stuff. I freaking love it. I mean, we were literally walking in and around buildings that had been walked in and around for thousands of years. THOUSANDS OF YEARS. It’s literally unimaginable. You may think you can imagine it, but I promise you. You cannot.

Athens, in days of yore, was a thriving city and so there are plenty of things to see throughout the city. We did the Acropolis first on Thursday and saw the rest during the next few days. If you can, I’d go see the Acropolis twice but if you go first you get a ticket for 12 EUROs that is good for all of the other main sites (not including museums) as well. Definitely worth it.

The Acropolis is the main rock in the center of it all. The Sacred rock which houses the Parthenon and the Temple of Athena Nike and the Erechtheion. It is truly incredible. Pictures won’t do it justice but here it goes: 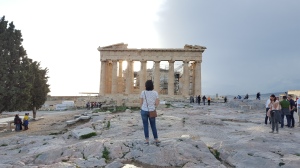 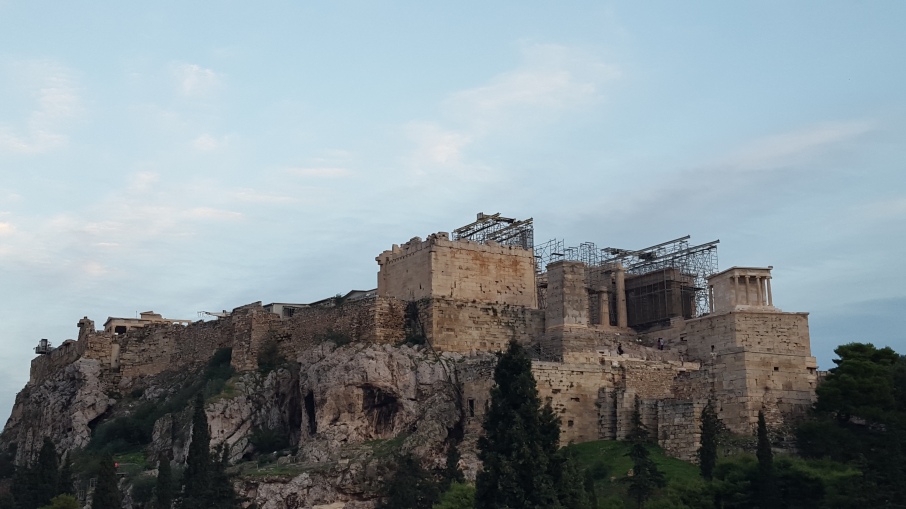 This last picture was taken from Mars Hill, a hill of bare marble that over looks Athens and the Acropolis. It is where the Apostle Paul came and preached Christianity to the people of Athens…but didn’t have a lot of luck so he moved on to Corinth.The Acropolis is one of the most awe inspiring places I’ve ever been, it also has a killer view of the city of Athens.

The history in Athens is so robust and so sprawling that it’d be impossible for me to speak to it all in a single blog post. There is Hadrian’s Library, The Theater of Dionysus, the Ancient Agora, the Roman Agora, Hadrian’s Arch and the Temple of Zeus Olympia which housed a statue that was one of the Wonders of the Ancient World.

I’ll post some pictures at the end of the blog post of each of these places just so you can have a peak. But you’ll need to go in person to experience them in any sort of meaningful way.

Athens also houses one of the best museums I’ve ever been to. The Acropolis Museum is relatively new as the old one sits as a workshop on top of the Acropolis. It is, incredible. They have even attempted to recreate the artwork of the Parthenon on the top floor in the layout of the actual Parthenon. Many of these pieces were stolen by the British or destroyed by the Christians who felt they didn’t depict their god. (There are a lot of places in Athens where this is the case, the Christians “built over” or “removed” a lot of the ancient temples and artwork…so…you know)

Honestly, you should go to this museum. They even built it over a portion of the ancient city of Athens with glass floors so you can look down and see it. Stax saw a cat down there. Eventually the city will be open to the public as well…so we’ll be going back.

Ok, this post is getting a bit long. And I want to make sure you get to see a few more pictures before you start to get tired so I’ll kind of wrap things up here.

Athens is amazing. The history and the food and the people make it one of the best places I’ve visited and makes me want to go back as soon as I’m able. Greece is a big place with lots of places to see and we didn’t scratch the surface but I am so thankful we got to see even this small part of it.

Ancient Agora with Acropolis in background 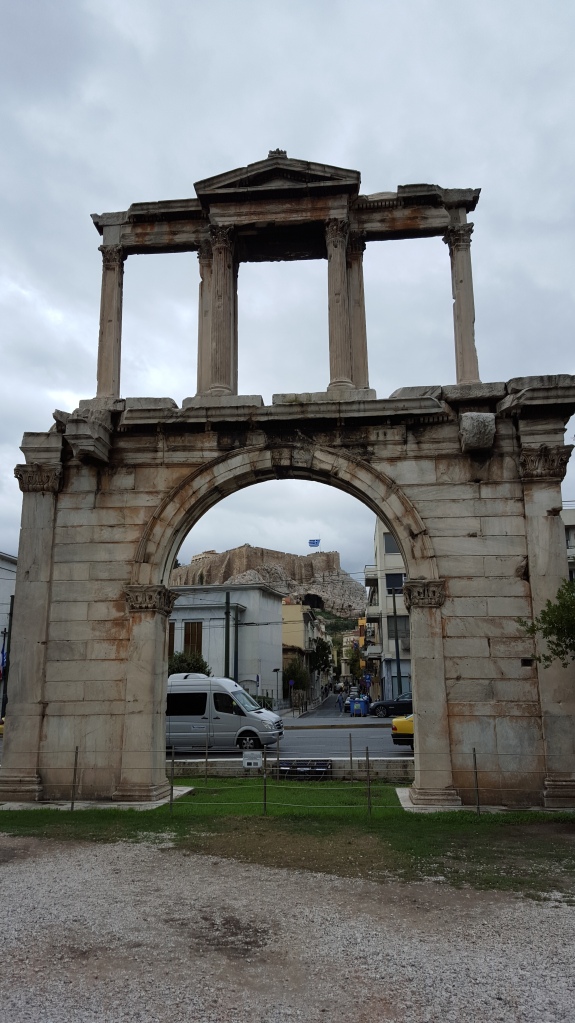 Bye Athens, thanks for all the meat! 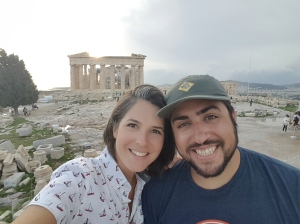