Paros (pronounced pa-rose) was the island we started on during the first half of our trip. It’s part of the Cyclades (pronounced Psych-lades) which is a series of islands south of mainland Greece (pronounced PHGreece, the PH being silent).

Thee Cyclades are what people think of when they think of Greece, the white buildings with blue doors or roofs, narrow pathways, each ending in a glimpse of the sparking blue of the Mediterranean.

I’m fairly certain I didn’t read that description anywhere, but if there are any famous travel magazines reading this blog, please feel free to use that.

Anyways, Paros is one of the islands closer to the mainland, about a four hour ferry ride from Piraeus. Where as it’s more famous sister islands of Mykonos and Santorini are seven and eleven hours respectively. We’d tried to get a ferry from Paros to Mykonos for some of our island adventure but due to it being October and the off season the ferry we needed was no longer running. (Pro tip, things shut down on islands when there aren’t lots of people coming, make sure to bring a crowbar or lock-pick set to compensate.)

Even though we couldn’t get to Mykonos and simply didn’t think our marriage would survive an eleven hour trip to Santorini I wouldn’t have changed a thing about our first trip to the Greek Islands.

Paros, was amazing. Honestly, there are too many pictures to possibly put in this blog, but I’ll try: 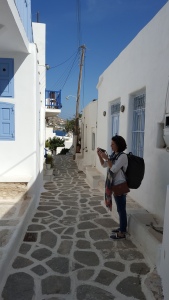 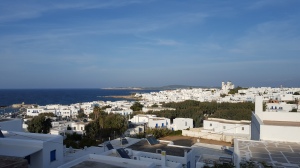 It was beautiful there. I mean. Look at that shit. It’s gorgeous and full of boats and that’s Stax, in Greece, on an island! Had to beat. The picture of the boats is actually in the little town we stayed in called Naousa which is a little fishing port on the north side of the island.

The main port on Paros is also nice, but apparently Octopus is a big deal in Naousa and Stax wasn’t having us stay any other place. They’d dry it right on the dock on long wooden poles or above the door to their restaurants.

It is by the way, a big deal. Octopus. In fact we ate it every single day we were there. Grilled with lemon, a greek salad and some anchovies…and wine or beer. Lots of wine or beer. In fact, our tables usually looked like this:

Which is not a bad way for a table to look.  That beer is called Alfa, and the first day we ordered one it cost us around three Euros and came out in a 500ml bottle. We pretty much stuck to that or white wine for the duration of the trip which, when it’s that cheap means we drank a lot of it.

But enough about food…even as I said that I could feel a bit of myself dying.  But, since I could probably write 50,000 words about the food there/food anywhere I should probably move on.

We stayed at the Hotel Senia in Naousa in an incredible cute little room with a little porch that overlooked the infinity pool and the Mediterranean.

That’s a view from our window. We spent a lot of time in those chairs drinking wine and looking out over the pool.  As you can see, it didn’t suck. I would recommend Hotel Senia to anyone, the views were amazing and the people who worked there were just as lovely.

The first day was spent exploring Naousa and doing some general walking about…and sweating. It was incredibly hot there and I manged to sweat through basically everything I owned during the trip. This was also my first taste of people thinking I was Greek. I always try to learn a few phrases so I don’t seem like an asshole American, but in Greece the minute I said “hello” a little grandma in a small mart would start rattling away in Greek, I assume asking me if I’d eaten and whether or not I had told my mother I loved her.

The second day, we rented scooters. Which. Was. In. Cred. A. Bull. Seriously. It was ridiculous.

We eventually made our way to one of the towns on the interior, Lefkes. It’s up in the hills of the island, which were amazing in their own right, but this town was so freaking lovely I couldn’t even stand it. And after I got done sitting, I took some pictures… 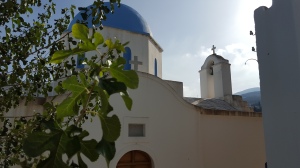 Eventually, we made our way back to Naousa and our hotel for the night and once again, had dinner. This time, as we’d already eaten octopus that afternoon, I convinced Stax to eat meat…please accept this gratuitous meat shot.

One thing that’s not pictured here are the cats that have encroached on our eating space. They are, however, pictured here:

There are so many cats roaming around in Greece, it was basically heaven on earth for Stax. They could sense her weakness and swarmed us like sharks who smelled blood in the water. They wanted what all cats want, for you to feed them and to kill you in your sleep. It took everything Stacey had not to just dump her entire plate of food on the ground, but she did make a little “to go” bag for the cats in hopes they’d follow us back to the hotel.

I’m not kidding about the cats though, they were everywhere. They are like squirrels there, which I am assuming don’t exist in Greece since the cats eat them. Stax had many a photo shoot with the kitties of Greece, and honestly…so did I.

They were all cute and from what I can tell, none of them had fleas…right?

Ok, so the last day on Paros was spent getting up early to take advantage of some scooter time, which sounds like it’d look like this: 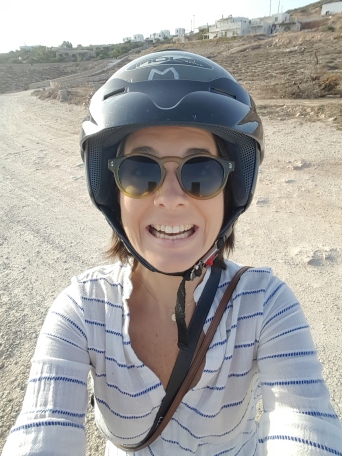 We actually took the scooters around the port we were staying at to do a bit of climbing and swimming, here’s what we saw.

Stax has a lot more pictures than I do as she is far more talented with a camera and also sees things that I don’t. So, if you want to see those you’ll need to become friends with us on a more personal level and booze her up so she’ll show you.

We did have some pool time as well, which was lovely and necessary given the past few weeks. But those pictures show me in a bathing suit and I really want you all to come back and read this blog so I’m not going to show them…ok fine, here’s one.

I kept Stax in the shot since you need something good to look at.

As our time on Paros came to an end, we both were very uncertain that we wanted to leave. We’d had easily, one of the most amazing times of our lives on a beautiful island full of beautiful people. But, we had an amazing adventure ahead of us in Athens. And we’d already booked the ticket home…so you know…we kinda had to leave.